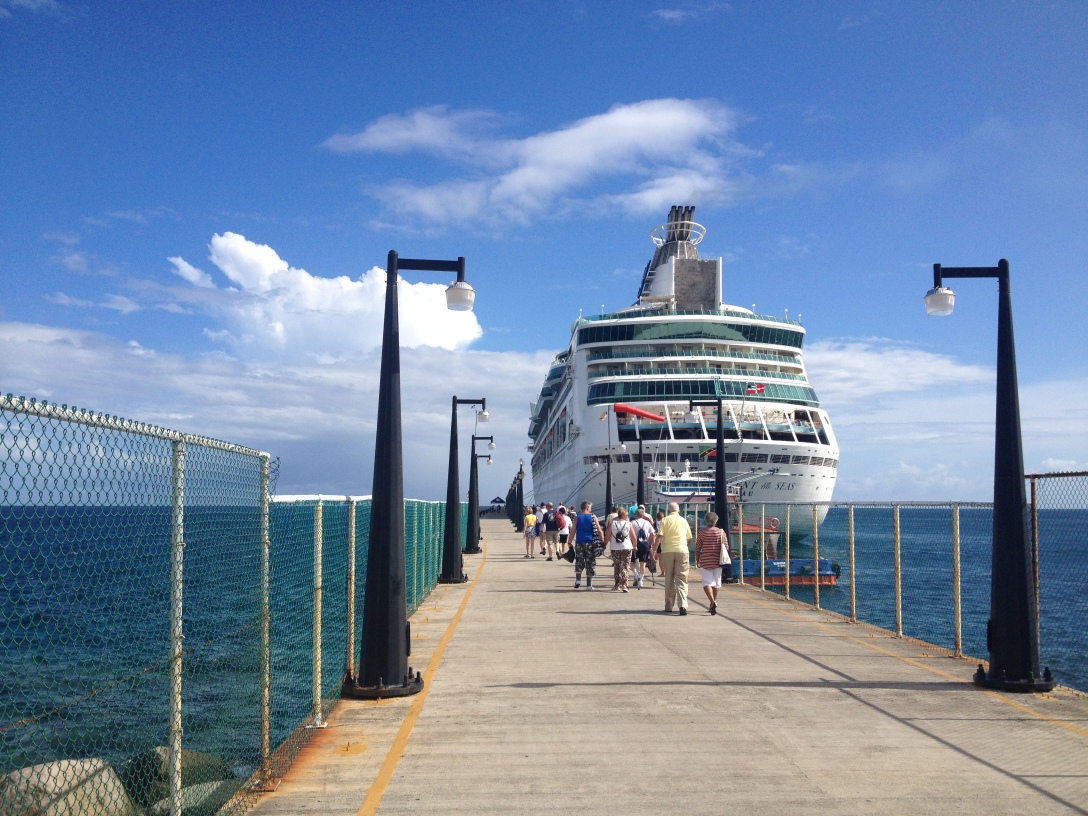 Here’s another landmark to add to the still relatively young 2013. As you will most likely already know from my previous posts, I’ve been waiting to be assigned a ship for my new job. Six weeks ago, whilst on Koh Tao, sitting in the office of a small production company, I got an email. This was the email I had been waiting for. It simply read; ‘Ship Assignment – ENCHANTMENT OTS – Baltimore, MD – April 13th’. Which is American for the 13th April. At the time, this was only three weeks away. Which was great, something was finally happening. But it also meant that I would be leaving Mos far sooner than we’d expected. But as we’ve discussed many times, this was going to be great for our future. My new job on the ship would allow me to take home plenty of tax-free cash, and, they’d be able to hire Mos too. We’d be able to build our savings account to the point where we could buy a house in the UK, or, retire in Thailand in the space of a few years. And of course, you need money before starting a family.
Shortly after I received the email Mos and I started running around the island doing last bits of shopping that I’d neglected. Socks for example. Living in Thailand socks quickly make their way from the wardrobe to the bin. We had parties, sometimes multiple parties each day. On an island like Koh Tao, the resident community is small, and as a result people want to say goodbye when someone leaves. But as most of them are small business owners finding a single date and time for a party is nearly impossible. So, and I’m not complaining about this, we have lots of leaving parties.
Royal Caribbean, my new employer, had booked my flights from Bangkok to Washington DC. But I still had shopping to do and more importantly a visa to get! So I headed off to Bangkok to start the process, which annoyingly, was at precisely the same time as Songkran, Thai new year. Songkran is effectively the worlds biggest water-fight. It’s brilliant. But it also means that the entire country, including foriegn embassies close down for the week. Luckily I managed to get my visa granted, hours before the shutdown.
A couple of days later Mos traveled up from Koh Tao to meet me in Bangkok. As this would be the last few days we’d spend together for possibly up to seven months we decided to treat ourselves. We went for nice dinners, shopping, sightseeing and even to Siam City theme park. Where Mos proved to me that roller-coasters really can make someone projectile vomit. Despite this, we had a great day.
Once Mos and I had exhausted our time, money and bodies it was time for me to leave. I picked up my new suit, tuxedo and shirts from my tailor. Packed my bags and headed off to the airport. Mos and I had one last milkshake together before I disappeared into customs. I hate leaving her, especially at airports.
I flew with Qatar, who I’ve flown with a few times in the past and they have always impressed. This trip was no different. And in case you’re wondering, Doha airport still has a huge amount of camel themed souvenirs along with countless diamonds, jewelery and watches for sale.
Once I arrived in Washington I was met by the US Immigration team. And like all crew, apparently, ushered into a waiting area where my visa and passport where double and triple checked against their various databases. After an hour I was let through. The first thing you see when you leave Washington Dulles airport is a huge American flag. Today it was back-lit by the sun with perfectly trimmed grass surrounding it. It was like I’d walked into a film. After a short wait my van arrived to pick me up and take me to my hotel.
Maybe it was the 32 hours of traveling. Maybe it was the feeling of elation after finally getting through customs. Maybe it was just me being acclimatised to rock-solid mattresses and hot, humid rooms in Thailand. But the Holiday Inn at Washing Dulles airport had the best bed. Ever.
During the day other new crew arrived at the hotel. Most of us had arrived by the time we had our complimentary dinner in the restaurant. I met a guy from Serbia who was going to be signing on as Stage Staff. His name is Srdan, but it’s pronounced the same as the English word ‘surgeon’. It turns out Serbia is one of the biggest denominations of crew on this ship, behind the Philippines, Indonesia and India.
The following morning we were all picked up by a coach and driven to Baltimore, which is just over an hours drive away. Once we arrived at the port, US Customs and Border Patrol met us and led us into a secure crew area where our belongings were x-rayed and we were searched. Finally we were moved to  secure holding room with tea, coffee, pastries and the usual tea trolley bits. We had to wait for the passengers to get off the ship, once they were, staff distributed our contracts and other paperwork and took or passports. Then, we were led to the gangway of the ship. On the ship we dumped our luggage in the middle of deck one, which, apart from a small area for guest embarkation, is completely for crew. We waited in line at the HR office to have our photos taken and information checked. Once we had completed that, each persons supervisor came to pick them up and begin to show them around their relevant work, living, leisure, eating and emergency areas.

Enchantment at Dock.
Thankfully, my job comes with a rank. I’m a 2-stripe officer. To give you perspective, the captain is 4-stripe. And out of the 850+ crew, only 240 of us are ranked with stripes. Starting with half-stripe followed by 1-strip, 1.5-stripe, 2-stripe and so on. The crew is further divided into three groups; crew, staff and officers. Officers are the marine department, the people that stand in the bridge, along with the various heads of engineering and so on. The crew are the people that keep the ship running; engineers, cooks, cleaners, deck boys, painters, laundry and so on. The staff are the people that are neither required to operate or maintain the ship. The staff are the luxuries; executive housekeepers, concierges, cruise directors, managers and me. I work in the Broadcast team. I say ‘team’, really it’s just me and Frank. Between us we manage all of the broadcast related satellite equipment, the encoders, decoders, streaming systems, scheduling systems and just about anything on the ship that involves video of any description. Having said that, the collective term for all employees is ‘crew’.
My job and rank means that I have access to all of the guest areas, all day, I can use any of the crew, staff or officer facilities and most of the guest facilities. In-fact, tomorrow I will be going to the on-board spa & saloon to get a long-overdue haircut. One restriction on all crew, even the captain, is use of the casino. No employees, of any rank or role can gamble on board. Which is fine, because even if you did want to gamble your wage away, there are plenty of casinos in the ports we visit.
Another restriction that applies to all employees is alcohol. Royal Caribbean operate a zero tolerance policy on alcohol and drugs. You’re allowed a blood alcohol content level of 0.04 whilst on-duty, and 0.05 when off-duty. Both of which are far lower than most drink/drive limits. If you’re found to be over these limits at any point you will leave the ship, and the company at the next port. As for drugs, any possession, use, or trace in your system of drugs will result in you leaving the ship at the next port, getting fired and being turned over to local authorities. Which could mean a 25-year prison sentence in a small jail in the Bahamas. Not good. None of which bothers me as I’ve never touched drugs and I very rarely drink alcohol.
During my first two weeks on the ship my predecessor, Homer, was on-board to show me the ropes and get me up to speed. Which on this ship meant showing me all of the equipment that is broken, or about to break and how he manages to do his job around them. Homer is now on a four-month holiday and will be rejoining the fleet in Australia on the Radiance of the Seas. It’s a hard life.
My first two weeks didn’t only involve Homer showing me computers that pre-date most modern civilisations, I also had ‘training’. Training, like most other things on the ship is divided into stuff you need to know to save your life (Marine), and stuff you need to know to make guests happy (delivering the ‘wow’). We had two or three sessions each day. I, unlike most, found the marine training interesting and looked forward to each session. After all, it could literally save your life. The training that they call ‘Delivering the WOW’ bored me to my core. There are hour long presentations on how to smile at guests, how to point at things in ways that don’t cause offense, how to converse with guests and various other life-lessons that anyone who wasn’t locked in a box from birth would have picked up by the time they were ten years old. I hated it. With a passion.

This is my life boat, lowered and ready for lowering in Nassau, Bahamas.

A few years ago I lost my granddad, Alex, to cancer. There are a few conversations and moments that we shared that inspired me to change everything. The stories he had and the items he'd collected amazed me. He is my inspiration and I miss him greatly. 'The people who are crazy enough to think they can change the world, are the ones who do.' Tom View all posts by Tom